Why We Celebrate Dussehra after Navratri

Dussehra is one of the most popular festival in India. Since our childhood, we use to celebrate the Dussehra festival just after the nine holy days of Navratri. The nine days of Navratri for Durga puja dedicates to each form of the Goddess Durga. The nine Goddess worshipped are Shailputri, Brahmacharini, Chandraghanta, Kushmanda, Skanda Mata, Katyayani, Kala Ratri (Kalratri), Maha Gowri and Siddhi Dayini.

But We never think about why we celebrate Dussehra or Dashmi just after the nine-day of Navratri. 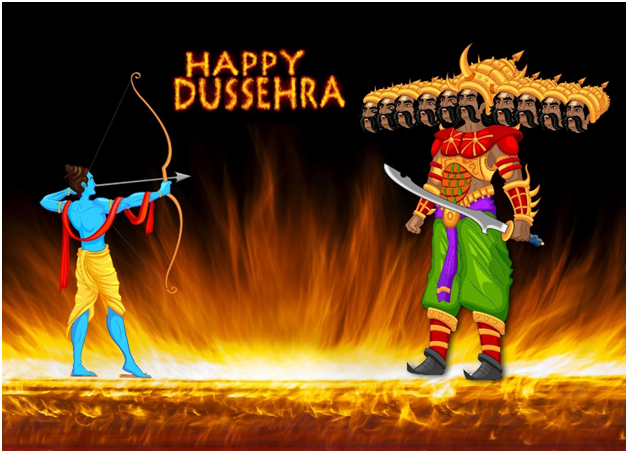 The story is from the epic Ramayana. When the war between Lord Ram and Ravana was on the peak and the situation was that Ravana was dominating the battle. Most of the soldiers from the side of Lord Ram was injured and there were lots of injuries in Lord Ram’s team. Ravana was full of joy, pride, and ego. The loud sound of laughter and egoistic voice can be heard to the whole battlefield.

Lord Ram was confused about where his team is doing mistakes and what they are lacking. Then Lord Ram observed that Ravana was not only who was fighting, but there was also a synergy of Goddess Durga the Shree Shakti which evokes the Ravan to fight. Then Jamvanta asks Lord Ram to worship Goddess Shree Shakti until she gets impressed by you. Lord Ram asks Hanuman to bring 108 Neel kamal from Devi Deh Sarovar for meditation. Lord Ram gets on the higher stage of meditation gradually with time.
The first day of the Navratri passed as the second day of the Navratri passed and time passes on and it came the tenth day of meditation with intensity at its peak. Then, only one Neel kamal remained and the Goddess Shree Shakti decides to take a test of Lord Ram. The Goddess Shree Shakti pick that last Neel kamal and Ram was searching for the Neel kamal during the meditation to serve the Goddess.  When he was unable to find the Neel kamal then he decides to dedicate his eye to serve the Goddess. As he put his arrow to pull one of his eyes out, the Goddess stops him and gets impressed by the dedication of Lord Ram. Goddess Shree Shakti gives her divine energy to Lord Ram. On the tenth day, Lord Ram gives his best and defeats Ravana with his ‘Amogh Arrow’.
From this incident, we can see that even Lord Ram was frustrated from his failure but his dedication and sincerity helps him to focus again and come back on the tenth day of the battle.